This is how it all came about. Six or seven of us were sitting one day after tea. Some were gazing across the street into the windows of a milliner's shop where the light still shone brightly upon scarlet feathers and golden slippers. Others were idly occupied in building little towers of sugar upon the edge of the tea tray. After a time, so far as I can remember, we drew round the fire and began as usual to praise men­ how strong, how noble, how brilliant, how courageous, how beautiful they were how we envied those who by hook or by crook managed to get attached to one for life when Poll, who had said nothing, burst into tears.

Poll, I must tell you, has always been queer. For one thing her father was a strange man. He left her a fortune in his will, but on condition that she read all the books in the London Library. We comforted her as best we could; but we knew in our hearts how vain it was. For though we like her, Poll is no beauty; leaves her shoe laces untied; and must have been thinking, while we praised men, that not one of them would ever wish to marry her. At last she dried her tears.

For some time we could make nothing of what she said. Strange enough it was in all conscience. She told us that, as we knew, she spent most of her time in the London Library, reading. She had begun, she said, with English literature on the top floor; and was steadily working her way down to the Times on the bottom. And now half, or perhaps only a quarter, way through a terrible thing had happened. She could read no more. Books were not what we thought them. "Books", she cried, rising to her feet and speaking with an intensity of desolation which I shall never forget", are for the most part unutterably bad!"

Of course we cried out that Shakespeare wrote books, and Milton and Shelley.

"Oh, yes," she interrupted us. "You've been well taught, I can see. But you are not members of the London Library". Here her sobs broke forth anew. At length, recovering a little, she opened one of the pile of books which she always carried about with her" From a Window" or "In a Garden", or some such name as that it was called, and it was written by a man called Benton or Henson, or something of that kind. She read the first few pages. We listened in silence. "But that's not a book", someone said. So she chose another. This time it was a history, but I have forgotten the writer's name. Our trepidation increased as she went on. Not a word of it seemed to be true, and the style in which it was written was execrable.

"Poetry! Poetry!" we cried, impatiently. "Read us poetry!" I cannot describe the desolation which fell upon us as she opened a little volume and mouthed out the verbose, sentimental foolery which it contained.

"It must have been written by a woman", one of us urged. But no. She told us that it was written by a young man, one of the most famous poets of the day. I leave you to imagine what the shock of the discovery was. Though we all cried and begged her to read no more, she persisted and read us extracts from the Lives of the Lord Chancellors. When she had finished, Jane, the eldest and wisest of us, rose to her feet and said that she for one was not convinced.

"Why?", she asked, "if men write such rubbish as this, should our mothers have wasted their youth in bringing them into the world?".

We were all silent; and, in the silence, poor Poll could be heard sobbing out, "Why, why did my father teach me to read?"

A. Answer the following questions according to the text: 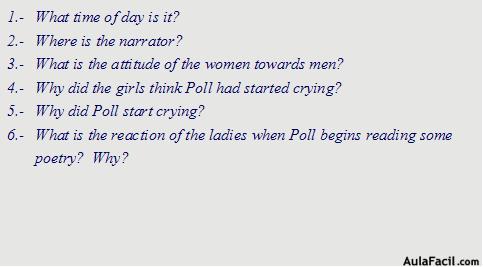 A. Fill in the gaps with the correct answer.

B. For each of the sentences below, write a new sentence as similar as possible in meaning to the original sentence, but using the word given. The word must not be altered in any way.