Look at the following pictures and explain why each person is Happy. What situations make you happy?

The Pursuit of Happiness

Ricky Gervais mocked it mercilessly. But can a new TV show get slough smiling again? By Mira Katbamna

Work is fun. Work is exciting. Work will make you happy. Don't worry - this isn't brain-washing for beginners, it's the future. Moaning about work may be the British national sport, but it turns out we have got it all wrong. Misery is out, happiness is in.

There are good reasons to be happy at work: you are more likely to be successful, be promoted and, on average, land up richer. But if you're miserable, how do you become happy? And if your company is down in the dumps, is there any way to perk it up?

Jessica Pryce-Jones and Philippa Chapman think there is. As directors of I-Opener, a company devoted to making workplaces happier, the pair were challenged to lift Slough from its slough of despair as part of a forthcoming BBC series. Making Slough Happy sees them working with Tunes Engineering, one of the oldest companies in the town.

They had first to prove that happiness is a serious business, testing participants' perceived happiness quotient, before putting the whole company through workshops and exercises designed to improve their positive thinking. As Pryce-Jones points out: "It's perfectly possible to be happy at work. Being miserable is easy - being happy means acknowledging your choices and taking charge."

Their biggest challenge was the chairman and owner of the company, Christopher Harbord. A self-confessed pessimist, Harbord says he initially thought Pryce-Jones and Chapman were just a Trinny and Susannah for the business world. "I was horrified when I first saw them", he says, "and as we have very low staff turnover, I couldn't see that we were an unhappy company". But he was surprised at the difference the experts made. "I never thought I was happy myself but now I'm happy most of the time", he says. "I can't yet say whether it's translated into business success, but we hope so".

Roger O'Connor is in charge of goods in at Tunes. Initially he thought Pryce-Jones and Chapman were just "scatty women". He says: "They tried to convince me that money wasn't everything, but that's what I come to work for!". Nevertheless, O'Connor believes Tunes is a happier place now. "The biggest impact has been on how we work together and they really taught us how to look at the positive. If you come in with a negative attitude, it's much more difficult to get through the day".

O'Connor, who had found his workspace dark, dingy and depressing, also got his lighting changed. "It wasn't something I would have mentioned before because I didn't think it was important enough, and it's a bit of a girly thing to complain about", he says. "But they encouraged us to look at the little things that make a difference".

None of this surprises Nick Isles, director at the Work Foundation and author of The Joy of Work, who thinks it makes sense for employers and employees to sign up to the happy agenda. "As we've moved from an economy based on delivering things to one delivering services, employers have gained increasing discretion over the quality of the product", he points out. "So creating conditions where employees are happy necessarily improves the product".

In fact, says Isles, the relationship is direct: increase staff happiness and you get better rates of staff retention, fewer absences and higher returns, all resulting in higher productivity and, therefore, higher profitability.

But has making Tunes happier made Pryce-Jones and Chapman happier? "It was stressful, so it didn't make me happier at the time," Chapman admits, "but I'm definitely happier having done it". Pryce-Jones agrees. "Happiness is not all-singing, all-dancing", she says. "The journey was tough, but the outcome was worth it."

Making Slough Happy is on BBC2 on Tuesday at 9pm

A. Answer the following questions according to the article: 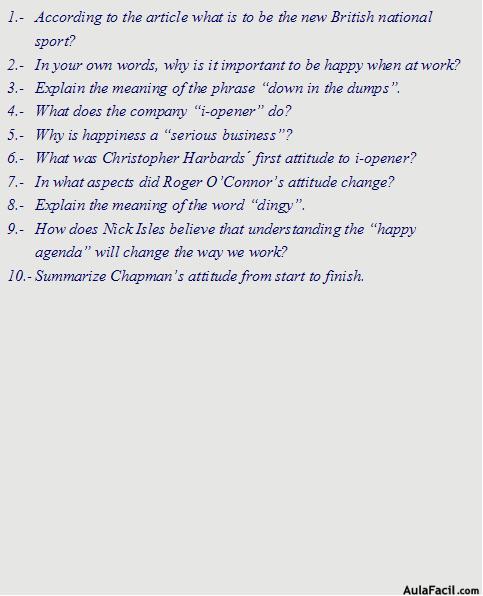 B. Find words from the first 4 paragraphs which are similar in meaning to: