A. Complete each sentence with one of the words or phrases given

Animals can be happy too

Jonathan Balcombe
Monday May 29, 2006
The Guardian

A group of hippopotamuses rests motionless in the cool of an African freshwater spring. Schools of tiny fish have gathered round their flanks and feet, nibbling at parasites and sloughing skin. The hippos, far from passive participants, splay their toes, gape open their mouths and spread their legs to assist the fish in their cleaning services.

Five thousand miles away, in a Montreal lab, an iguana ventures away from her warm perch to retrieve a gourmet tidbit from a frigid corner of her terrarium, ignoring the dull, processed reptile show just beneath her perch. It's a reptilian version of shunning the fruit bowl and dashing out for doughnuts on a wintry night.

And in Bowling Green, Ohio, a pair of young rats utter ultrasonic squeaks as they chase a hand to be tickled. Rats accustomed to being petted also approach a hand, but not nearly so quickly, nor with as many squeaks as rats trained to expect a tickle.

These three examples of animal behaviour share a common, central element: pleasure. In each case, the motivation for the behaviour is the reward of a pleasurable experience.

"So what?" you might ask. If you have been owned by a cat or dog, you have probably witnessed the animal's blissful comportment during a chin scratch or belly rub and received an indulgent nudge for more after withdrawing your hand.

But science (while more than willing to broach the important matter of animal pain) has shown a profound lack of interest in animals' capacity for good feelings. We scientists prefer evolutionary explanations for animal behavior. How an animal may be consciously experiencing his or her world is generally reserved for after-hours chats, and doesn't get published in scholarly journals.

What is the evidence, then, that pleasure plays an important role in how animals experience the world? First, there is the simple fact that as humans, we know pleasure and this suggests that similar creatures do, too. There are also parallels between our emotional and biochemical responses and theirs. For example, when rats are anticipating opportunities to play, their brains show an increase in dopamine, a compound associated with pleasure in humans.

Perhaps the most important argument for animal pleasure is that it is adaptive. Just as evolution favors pain as punishment for dangerous or maladaptive behaviors, pleasures evolved to reward behaviours that encourage survival and procreation.

But for most of us, it is how animals behave that provides the best window onto their inner lives. As the earlier examples with hippos, lizards and rats illustrate, animals often behave as though they are enjoying themselves and also manifest signs of exhilaration, joy, love, curiosity, and mischief.

Humour is also not only the province of humans. Chimps mock, dogs tease and parrots provoke. When asked to identify the colour of a white towel held up by a teacher, a gorilla named Koko repeatedly signed "red". Then, grinning, she plucked off a bit of red lint clinging to the towel, held it up to the trainer's face and signed "red" again.

What are the implications for humankind's relationship to animals when we acknowledge and embrace the richness of their sensory experience of their worlds? It is convenient and economical to exclude animals from our sphere of moral concern - as we do, for example, in the meat, biomedical research, and fur industries. But is it right?

To the degree that animals can enjoy life, we may conclude that our moral obligations to them are greater. We may have no obligation to provide pleasure to another, but actively depriving them the opportunity to fulfil natural pleasures (as we do when we cage or kill them) is another matter.

Dr Jonathan Balcombe is the author of Pleasurable Kingdom published by Palgrave Macmillan. He will be speaking at the Dana Centre at the Science Museum in London on June 1. Tickets are free but must be prebooked on 020-7942 4040 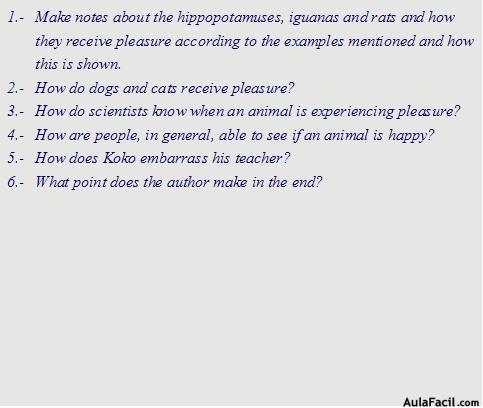