Complete each sentence with one of the words given

A scientist is continuing his quest to find rational explanations for unusual beliefs - by creating his own "haunted house".

Professor Richard Wiseman, a University of Hertfordshire psychologist who has previously researched luck, superstition and fake psychic phenomena, now hopes to use a house to explore the psychological effects of hauntings.

As a former magician, Wiseman has a few tricks up his sleeve - including eerie lighting, odd electromagnetic fields, infrasound vibrations, changes in temperature and draughts.

By manipulating these phenomena, he hopes to record visitors' responses to physical changes in their surroundings - testing his belief that "haunted" feelings are caused by responses to the environment, not ghosts.

"I think people have genuinely strange experiences," he says. "They can be because of environmental factors and if the house is known to be haunted."

Wiseman is known for his research into the more unusual aspects of psychology. He has previously studied reactions of people in Hampton Court Palace and Edinburgh Vaults, both notorious for creepy goings-on.

Researchers there found that people had ghostly sensations in the same areas of the buildings - which turned out to exhibit physical phenomena such as visual stimuli, electromagnetic fields, drops in temperature and draughts.

"The problem is that they have naturally occurring parameters, so we can't easily change them," says Wiseman.

"If Richard is actually able to create some kind of artificial environment in which people get the same sensations they typically get when walking around a haunted house, then that would be a big step forward in understanding the psychology of those kind of experiences.

"However, it may be that Richard will not be successful in his attempt. This will still be of scientific interest, as it would undermine some of the psychological theories that are currently under consideration.

"However, it would be much more exciting if he was successful in his attempts and I wish him well."

The concept of the house is still in the early stages. Wiseman expects the project to get under way in a couple of years, and is already trying to find a suitable house - perhaps Edinburgh or London .

The project is estimated to cost £50,000. Wiseman has not yet found funding, but doubts regular research sources will be offered: "I'd imagine it'd have to be a commercial backer, probably tied in with the media," he says.

A. Answer the following questions according to the listening 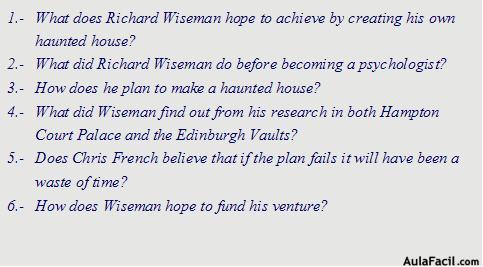