Fill each of the numbered blanks in the following passage with one suitable word from the box. 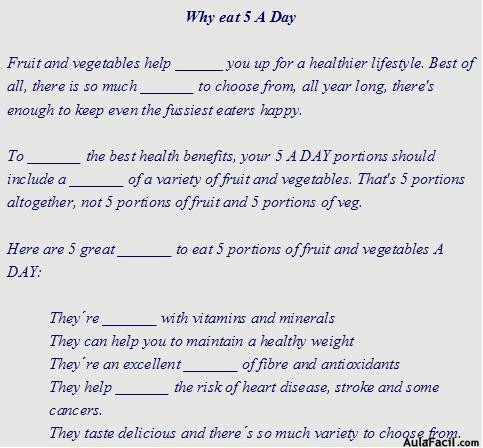 Child obesity has doubled in a decade

More than a quarter of children in English secondary schools are clinically obese, almost double the proportion a decade ago, and an official survey released yesterday also showed that girls were suffering more than boys from a crisp and chocolate-fuelled life of too much eating and too little exercise.

Colin Waine, chairman of the National Obesity Forum, said that the figures showed a "public health timebomb" in the making: children who were obese in their early teens were twice as likely to die by age 50, he said.

The figures, based on 2,000 children, come from the National Health Survey for 2004, and have alarmed doctors as well as casting doubt on the government's ability to achieve its target to halt the rise in childhood obesity.

Amanda Eden, care adviser at Diabetes UK, said: "We will soon be seeing our children growing up losing limbs and becoming blind, as they develop the serious complications of having the condition. A firmer line needs to be taken to force the food industry to adhere to foodlabelling guidelines, so people know what's in the food they buy.

"They also need to ban junk food advertising to kids, and find more ways of encouraging people to exercise."

A report by the National Audit Office in February said that the government would fail to halt the rise in obesity without clearer leadership from the top.

The target of stopping the rise by 2010 had been set in 2004, but plans to change children's diet and exercise at school and home had hardly got off the starting blocks, it said.

Caroline Flint, the public health minister, said yesterday: "We have taken huge steps forward and are starting to change attitudes through the Five A Day campaign, the school fruit scheme, and more investment in school food and sport."

However, she added that the government recognised that it needed to do more to meet the target.

Prof Waine said that the latest obesity figures were disturbing. "This is serious news, because obesity in adolescence is associated with the premature onset of Type 2 diabetes and cardiovascular diseases.

"It really augurs very badly for the future health of the population as these children move from adolescence to adulthood. We are in danger of raising a generation of people who have a shorter life expectancy than their parents."

He said that increased inactivity among children, such as not walking or cycling to school, coupled with more "energy dense foods" was fuelling the crisis. "Being obese at adolescence increases the cancer risk by 21% for girls and 14% for boys.

"In my youth, playing cricket and tennis were the norm. These have now been replaced by watching television and playing video games."

The survey also found that the obesity rate among adults had risen to 24%, in spite of people exercising more and eating more fruit and vegetables.

Andrew Lansley, the shadow health secretary, said: "In the last decade, British children have got fatter faster than anywhere else in western Europe. We are at risk of an epidemic of vascular diseases as a result. We need active and competent, cross-governmental measures, and we need them now."

A. Answer the following questions: