We are what we eat

Studies linking how genes and diet interact are helping food companies design products capable of protecting people prone to certain diseases. Some people eat three-egg omelettes topped with slivers of bacon and show no sign of a spike in cholesterol. Others indulge in one chocolate bar after another and stay as thin as a rake. Many, however, are less fortunate. Current research suggests that the culprit may be found in one's genes. Differences in genetic make-up may not only determine the body's ability to metabolise certain nutrients, such as fats and lactose, but also its susceptibility to disease.

The good news is that, within five years or so, researchers should learn how to modify people's diets to fit their genes and thereby prevent or delay the onset of a possible illness. At least, that is the goal of nutritional genomics-a new field that studies how genes and diet interact.

Projects in nutritional genomics are sprouting around the globe. Europe is merging its efforts in the field by launching NuGO early next year, a network that aims to integrate and develop the new branch of research. In America, the National Institutes of Health recently granted the University of California at Davis $6.5m to establish a Centre of Excellence for Nutritional Genomics.

In addition, there are international projects under way, such as HapMap, that focus on studying the pattern of inheritance of single nucleotide polymorphisms or SNPs (pronounced "snips"). These are places where the message encoded in the genome may vary by a single genetic "letter" between individuals. SNPs may determine differences in appearance, such as hair and eye colour, predisposition to illnesses, and how people respond to foods and drugs. Nutrition will be an important part of the new paradigm of "personalised medicine" and preventive health care, says Craig Venter, who spearheaded a private effort to sequence the human genome, and is now collaborating with Duke University Medical Centre to include genomic information in health-care planning.

Only a few diseases are based on mutations in single genes-as is the case with, say, cystic fibrosis or Huntington's chorea. As scientists have learned more about the human genome, they have found that many illnesses, including cancer and type II diabetes, are the result of an interaction between a number of genes and their environment. More than 100 genes have been implicated in the development of coronary artery disease (though carrying only one such gene is still a risk factor). But to express those genes, there needs to be a trigger-such as diet. Researchers estimate that diet may be the defining factor in a third of all cancers.

A gene is a recipe for making a protein. At the molecular level, various nutrients interact with genes by binding to DNA transcription factors-which regulate gene expression. Thus, the amount and type of food consumed affects the production of proteins directly.

Similar to "pharmacogenomics", which studies the effects of common genetic variants on drug response, nutritional genomics investigates the effect of diets on different individuals, groups and populations. But unlike drugs-which come as refined compounds, are administered in specific doses and have relatively short-acting effects-foods, like genes, act in concert. "They're like a great big symphony," explains Wasyl Malyj, who directs the laboratory for high performance computing and informatics at Davis's new centre. Moreover, the effects of foods are slow moving-and often take years before becoming visible.

As a result, no one meal is ever going to be detrimental for most people. The trick will be to find out what constitutes the best balance of nutrients over long periods. For example, a recent paper in the New England Journal of Medicinedescribes the effects of a traditional Mediterranean diet-lots of olive oil, fresh fruits, vegetables, legumes and nuts, moderate amounts of fish and wine, and little meat and dairy products. Those who adhered closely to the diet lived longer and were less likely to die of heart disease or cancer. There was, however, no association between longevity and any individual food component of the diet.

A. Answer these questions 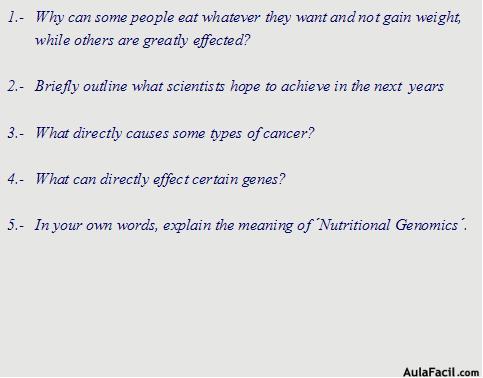 B. True or False - Please correct the False statements

C. Find a word or phrase in the text which, in context is similar in meaning to: