In today’s lesson, we are going to look at a few past mysterious events and I am going to introduce you to some important words and phrases which describe different types of mysteries.

There are lots of different mysteries in the world. There are problems which have been unsolved. Strange occurrences which have no meaning.

2.1.- Your teacher is now going to talk to you about a strange occurrence that happened to her a few years ago.

I have experienced one particular mystery which I will refer to as a case of mistaken identity.

One day I went to buy a new mobile phone and when I went to pay and register for the new phone, they said that there was a problem and that I couldn’t buy a phone with them.

They said that I had a bad credit rating. I was obviously very worried so I made a few phone calls to see what the problem was.

When I got to the bottom of the problem, I found out that there was a girl who lived in the same street as me with the exact same name and she was in really bad debt.

For that reason I had not been able to buy a new mobile phone. It was a case of mistaken identity.

Answer the following questions out loud giving as much details as possible:

Learn the following words that refer to strange events

5.1.- How many syllables do the following words have?

5.2.- Listen and repeat. Where is the primary word stress in each word? Fill in the following table.

5.3.- Match the words with the situations.

A coincidence / A trick / Telepathy / A natural phenomenon 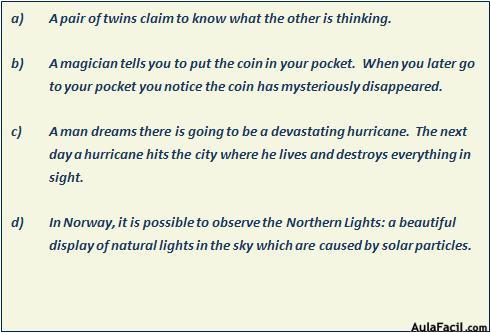 You are going to listen to a newspaper article which appeared in The Guardian in December 2009. The title of the article is “Spanish archaeologists fail to find Federico Garcia Lorca’s grave”.

Before listening, answer the following questions:

When we speak, we have to take regular pauses to breath. These pauses are important and help the listener digest what the person is saying.

7.1.- Look at the following paragraphs which have been taken from the article and identify where the pauses should take place by including a comma (,) in the place where the speaker should pause for breath.

The poet and playwright killed by death squads during civil war was thought to have been buried in Alfacar.

One of the greatest mysteries of recent Spanish history will remain unsolved for the foreseeable future, after a team of archeologists admitted they had failed to find the grave of poet and playwright Federico García Lorca.

"There was not a single bone, or fragment of bone," said Francisco Corrión, leader of the team that has spent six weeks digging at the site where Lorca was thought to be buried. "There is no chance of it being there."

García Lorca was the most famous victim of the death squads operating in territory controlled by General Francisco Franco's rightwing nationalists during the Spanish civil war.

Until today he was assumed to have been buried in a mass grave with several other death squad victims on a hillside in Alfacar, overlooking his home city of Granada.
The spot was identified three decades ago by a man who claimed to have helped dig the grave into which the author of Blood Wedding and Yerma was thrown, after being shot by a dawn firing squad of rightwing radicals in 1936.

After years of debate about what to do with the site, which had been turned into a park bearing Lorca's name, local authorities ignored opposition from the poet's family and began to excavate.

Today, however, the scientists involved said a thin layer of soil gave on to hard rock, leaving no space for anyone to dig a grave.

"No human remains have appeared, nor are there any signs of civil war graves," the team from Granada University, which investigated six potential grave spots, said in a report. "We believe that no graves were ever dug in the area we have studied. The study is conclusive and leaves no room for doubt."

The failed dig has brought the official quest for Lorca's remains to an end. "We are not going to be drilling holes all over Granada," said Juan Gallo of the regional government of Andalucia, which funded the dig.

"It is a challenge," said Maribel Brenes, head of a NGO dedicated to finding the graves of Franco's victims. "The investigation will have to start again from the very beginning."

Answer the following questions out loud giving as much information as possible.