The main topic of this lesson is fact or fiction. We are going to talk about books and look at an extract from a story. It will be up to you to decide whether or not the story is factual or fictional. We are then going to examine three prepositions of place: in, at and on.

1.1.- Look at the following questions and think about your answers.

2.1.- You are now going to listen to your teacher answer the above questions. Note down her answers:

Now it’s your turn to answer the above questions. Look at the tapescript if you need help answering the questions. 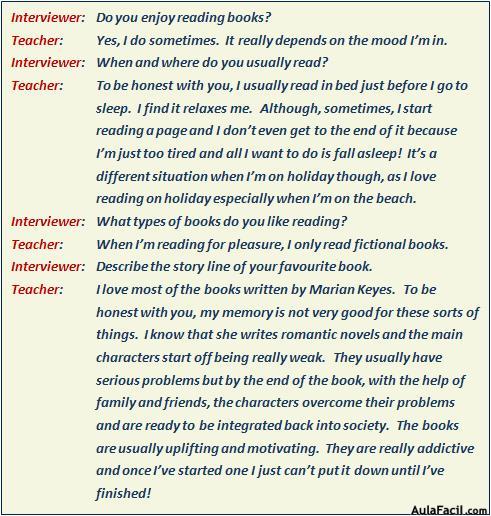 3.1.- Look at the tapescript and find two prepositions of place: in, at or on.

4.1.- You are going to listen to a short story. Decide whether or not you consider the story to be fact or fiction. What would you have done in Sarah’s situation?

Listen again and say whether the following statements are true or false. Correct the false statements.

5.1.- Fill in the following grid, with the prepositions of place you find in the tapescript. 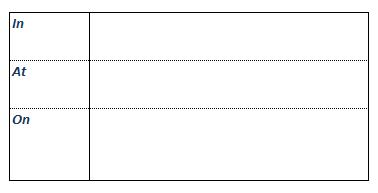 About a year ago, Sarah was waiting at the bus stop. It was ten to nine in the morning and Sarah was running late again. She was due at work at nine o’clock but generally never arrived on time. She knew her boss was going to be angry with her again but there was nothing she could do.

When she eventually woke up, she looked at the time and got into a terrible panic. She had overslept again! She ran in the bathroom, washed her face and brushed her teeth and then hurried into her bedroom only to find all of her clothes on the floor.

Now she remembered, the wardrobe had collapsed the day before and all of her clothes were in a pile in the corner of her room. "Why me?!" she thought to herself. She rummaged through the pile and found something to wear. Then she ran out of the house towards the bus stop.

She had been waiting for fifteen minutes when something very strange happened. A man on a motorbike stopped at the bus stop and asked if anyone wanted a lift into town. Sarah would not have usually contemplated such an offer from a complete stranger, but today she was desperate and was in serious danger of losing her job. So, when the man asked a second time, she said "yes" and jumped on the bike.

A year later, Sarah and the mystery motorbike man, Paul, are engaged to be married. It turned out that on that day when Paul had picked Sarah up from the bus stop, they had hit it off immediately and Paul had invited Sarah out for dinner that same day.

It was love at first sight and their relationship went from strength to strength until one day, yesterday in fact, Paul asked Sarah to marry him and of course, she accepted. 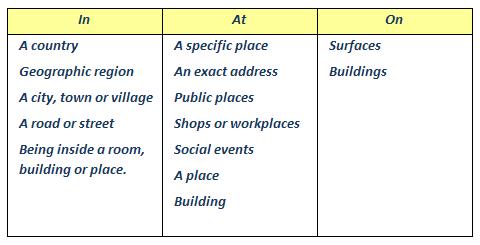 a) Study the following examples with in:

• In Spain the people speak Castilian (country)
• We took these photos in the mountains (geographical region)
• I used to live in London. (city)
• Selfridges is in Oxford Street (street)
• It is very hot in the living room (room)

b) Study the following examples with at:

• I was at my friend’s house (specific place)
• I live at 32 Bradgate, Cuffley, Herts (address)
• We’ll meet at the station (public place)
• James is at the supermarket (shops)
• They were at the theatre yesterday (social event)
• Does this train stop at Paddington? (place)
• Last night I ate at a restaurant (building)

c) Study the following examples with on:

• On the right / left
• On the first/second, etc floor.
• On the menu
• On the coast
• On a bus/train/plane/ship/bicycle/horse

- My house is the first on the left and I live on the third floor.
- I got on the bus.

- We were at sea for 3 months.
- They were studying at the University of London.

Answer the following questions giving as much detail as possible.