What would you do in the following situations? How would you try to survive?

The 1972 Andes air crash has been the subject of a bestselling book and a hit movie, but the story has never before been told by one of its survivors. In an exclusive extract from his gripping memoir of their 72-day ordeal , Nando Parrado tells how he escaped the icy wilderness and - against all odds - brought rescue to his comrades

Lying on the draughty floor of the aeroplane, there was no way to warm myself. But the cold was not my only concern. There was also a throbbing pain in my head. Carefully, I reached up to touch the crown of my head. Clots of dried blood were matted in my hair, and three bloody wounds formed a jagged triangle about 4in above my right ear. I felt rough ridges of broken bone beneath the congealed blood, and when I pressed down lightly I felt a spongy sense of give. My stomach heaved as I realised what this meant - I was pressing shattered pieces of my skull against the surface of my brain. Just as I was about to panic, I saw those brown eyes above me, and at last I recognised the face of my friend Roberto Canessa.

What happened?" I asked. "Where are we?" "You have been unconscious for three days", he said, with no emotion in his voice. "We had given up on you".

I remembered the flight through Planchon pass, where we travelled in cloud cover so heavy that visibility was nearly zero and the pilots were forced to fly on instruments. Severe turbulence was tossing the plane around, and at one point we hit an air pocket that forced the plane to drop several hundred feet. This rapid descent dropped us below the clouds, and that was probably the moment when the pilots saw the black ridge rising dead ahead. They gunned the Fairchild F-227's engines in a desperate effort to climb. This effort managed to raise the plane's nose a few degrees but their actions were too late to lift the plane completely over the mountain. The Fairchild's belly slammed into the ridge, and the damage was catastrophic. First, the wings broke away. A split second later, the fuselage fractured along a line directly above my head, and the tail section fell away. Everyone sitting behind me was lost - the plane's navigator, the flight steward and the three lads playing cards.

The forces of the collision were huge. The Fairchild's nose was crumpled like a paper cup. In the passenger cabin, seats were ripped loose from the floor of the fuselage and hurled forward along with the people sitting in them, and dashed against the cockpit bulkhead. Several passengers were crushed instantly as the rows of seats closed on them like the folds of an accordion, then tumbled into a mangled heap that filled the front of the fuselage.

As more and more passengers were pulled from the wreckage, the "doctors" were amazed to see that most of the survivors had suffered only minor injuries. Canessa and Zerbino cleaned and bandaged their wounds. My sister Susy was lying beside my mother's dead body. She was conscious but incoherent, with blood streaming over her face. Roberto wiped the blood from Susy's eyes and saw that it was coming from a superficial scalp wound, but he suspected, correctly, that she had suffered much more serious internal injuries.

In those early days we all believed that rescue was our only chance of survival, and we clung to that hope with an almost religious zeal. I never stopped praying for the arrival of our rescuers, or for the intercession of God, but at the same time the cold-blooded voice that had urged me to save my tears was always whispering in the back of my mind: "No one will find us. We will die here. We must make a plan. We must save ourselves".

We knew we were high in the Andes, but the snowy slopes above us rose up even higher, so that I had to tilt my head back on my shoulders to see their summits. The ridges formed a ragged semicircle that ringed the crash site like the walls of a monstrous amphitheatre, with the wreckage of the fairchild lying at centre stage.

In the days after Susy died, my love for my father (who remained at home) was the only thing that kept me sane. In my desperation, I raged silently at the great peaks that loomed above the crash site, trapping me in this evil place. After Susy's death, 27 survivors remained. The damage to my head was one of the worst injuries suffered in the accident, but the shattered fragments of my skull were beginning to knit themselves together.

We were dressed only in light summer clothing - some of us were wearing blazers or sports jackets, but most of us were in shirtsleeves. We had no warm coats, no blankets, nothing to protect us. High-altitude cold is an aggressive and malevolent thing. It burns you and slashes you, it invades every cell of your body. The draughty fuselage shielded us from the winds that would have killed us, but still, the air inside the plane was viciously frigid. I would lie in the dark for hours, my body shivering so hard that the muscles of my neck and shoulders were constantly in spasm.

The cold was always our greatest agony, but at first the greatest threat we faced was thirst. At altitude, the human body dehydrates five times faster than it does at sea level. There was no lack of water in the mountains - we were sitting on a snow-packed glacier, surrounded by millions of tonnes of it. Our problem was making the snow drinkable.

One sunny morning, Fito noticed that the sun was melting the thin crust of ice that formed every night on the snow. An idea came to him. He rummaged through a pile of wreckage and found, beneath the torn upholstery of a battered seat, a small rectangular sheet of thin aluminium. He turned up the corners of the aluminium sheet to form a shallow basin, and pinched one of the corners to form a spout. Then he filled the basin with snow and set it in the sunshine. In no time water was trickling steadily from the spout. Fito collected the water in a bottle and when the others saw how well his contraption worked, they gathered more of the aluminium sheets and fashioned them in the same way.

In the early days, hunger was not a great concern for us. The cold and the mental shock we had endured, along with the depression and fear we all were feeling, acted to curb our appetites. And since we were convinced that rescuers would find us soon, we were content to get by on the meagre rations we had. But rescue did not come. Deep down, I always knew we would have to save ourselves.

Again and again, I came to the same conclusion: unless we wanted to eat the clothes we were wearing, there was nothing here but aluminium, plastic, ice and rock. But, of course, there was food on the mountain - meat, plenty of it, and in easy reach. One afternoon, as we were lying in the fuselage, my gaze fell on the slowly healing leg wound of a boy lying near me. The centre of the wound was moist and raw, and there was a crust of dried blood at the edges. I could not stop looking at that crust, and as I smelled the faint blood-scent in the air, I felt my appetite rising. Then I looked up and met the gaze of other boys who had also been staring at the wound. In shame, we read each other's thoughts and quickly glanced away.

But for me, something had happened that I couldn't deny: I had looked at human flesh and instinctively recognised it as food.

"We are going to starve here", I said. "I don't think the rescuers will find us in time".
"You don't know that", Carlitos answered.
"I know it and you know it", I replied, "but I will not die here. I will make it home".
"Are you still thinking about climbing out of here?" he asked.
"Nando, you are too weak".
"I am weak because I haven't eaten".
"There is no food here", he said.
"There is", I answered, "You know what I mean".
"Fuck, Nando", Carlitos whispered.
"There is plenty of food here", I said, "but you must think of it only as meat. Our friends don't need their bodies any more".
Carlitos sat silently for a moment before speaking. "God help us", he said softly. "I have been thinking the very same thing".

This is an edited excerpt from Miracle in the Andes, by Nando Parrado, published by Orion Books.

A. Answer these questions 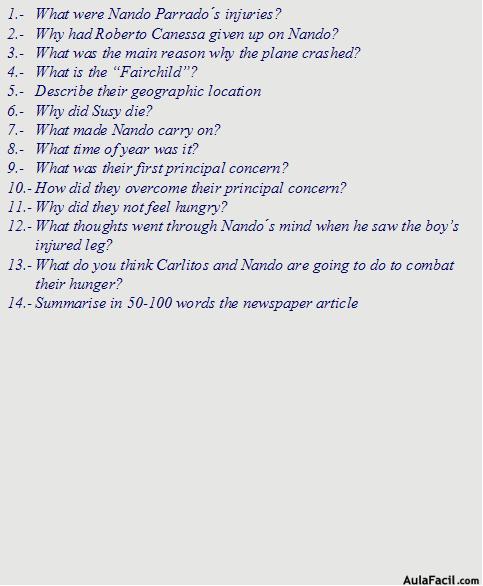 B. Explain the meaning of these phrases from the text (in bold)