What would you do in the following circumstances?

Your fiancé gives you a new expensive digital camera as a gift. When you break off the engagement you're asked to return the camera. What do you do?

You've sold your house. Before you move out, the roof starts to leak. Do you have it fixed? What would you do?

You and a colleague are competing for promotion. He makes a big mistake. Do you tell your boss? Explain your answer

Your brother is married and is having an affair. Do you tell his wife?

Do the right thing

From what we eat to which contraceptives we use, modern life is full of daily dilemmas . Our ethical expert Leo Hickman offers a guide through the moral minefield in these extracts from his new directory of green resources

Can I use a dishwasher or should I wash up by hand?

The assumption often is that dishwashers are non-essential and energy-hungry, but recent research shows that these appliances cannot be vilified so easily. They can use substantially less water and no more energy than washing up by hand. As it is common to wash up under running water to rinse off suds, water use for a sink of dishes can reach 150 litres, whereas a dishwasher will typically take a mere 20, and use less energy to heat it than a typical gas boiler

There are some caveats to the automated solution: manufacturing a dishwasher is highly energy-consuming in the first place, and can also involve the use of toxic materials. And to be energy-efficient, the machine must also be loaded properly, to full capacity.

It is possible for washer-uppers to redress the balance with good technique. Use a natural detergent, without potential toxins or pollutants, so that water can subsequently be used in the garden. Avoid washing up using running water, and remember that the water does not have to be very hot. Rinse dishes in a bowl of water on the side of the sink, not under a running tap.

Are second homes a selfish luxury or a harmless retreat?

More than a million Britons now own a second home. Many argue that these out-of-towners bring economic benefits to rural communities. Equally, though, second homes can price local people, including key workers, out of the housing market.

And the second-home phenomenon is spreading its wings. British buyers now snap up thousands of foreign homes every year. Their dream of a place in the sun is increasingly realised by the expanding reach of low-cost airlines. By 2012, it is estimated that second homers will take 12 million flights a year to visit their properties, exacerbating the environmental impact of air travel.

In 2003, 40% of all property sold in Spain went to non-nationals, while young Spaniards, unable to get on the property ladder, remain living with their parents in unprecedented numbers. By 2003, homes in the French region of Languedoc Roussillon cost 28% more than the year before, largely due to demand for second homes.

The danger is that by living between two communities, second-homers contribute fully to neither and can actually adversely affect the local community where the second home is located. Renting a locally owned property, or staying at a locally owned hotel, would be a better option.

Do we need to wash our hair?

In essence, most mainstream shampoos are glamorously packaged surfactants - chemicals that dislodge dirt and grease. You will find it hard to find a shampoo that doesn't specify its suitability for "daily use" or "frequent washing" despite the fact that most dermatologists warn that over-washing hair strips it of its natural oils. The scalp secretes sebum, which naturally lubricates and protects hair against dirt and bacteria.

Left to their own devices, our own natural oils in effect wash our hair without water or extra products. In fact, hair products have been shown to over-stimulate oil glands and attract dirt.

Few of us, however, may be prepared to run the risk of social exclusion by leaving our hair unwashed. The first six weeks are said to be the worst, culminating in a very oily phase between weeks five and six. This first phase conforms to the popular perception of unwashed hair - uncomfortable and unhygienic. But after this period, non-hair washers report healthy, self-regulating hair that looks better than ever. So good, in fact, that many vow never to wash their hair again.

A Good Life: The Guide to Ethical Living, by Leo Hickman, is published by Guardian Books.

A. Choose the best answer to the following questions.

B. Answer the following questions in your own words 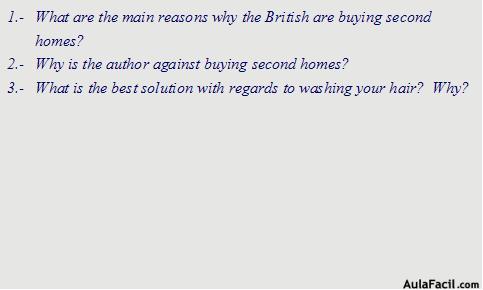 C. What do these phrases mean? 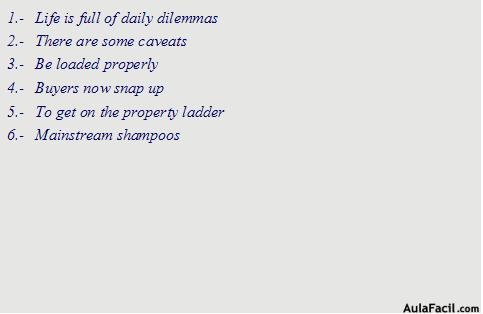 D. Find a word or phrase in the text (in the section "Do we need to wash our hair?") that in context, is similar in meaning to: