It was a strange figure -- like a child: yet not so like a child as like an old man, viewed through some supernatural medium, which gave him the appearance of having receded from the view, and being diminished to a child's proportions. Its hair, which hung about its neck and down its back, was white as if with age; and yet the face had not a wrinkle in it, and the tenderest bloom was on the skin. The arms were very long and muscular; the hands the same, as if its hold were of uncommon strength. Its legs and feet, most delicately formed, were, like those upper members, bare.

It wore a tunic of the purest white and round its waist was bound a lustrous belt, the sheen of which was beautiful. It held a branch of fresh green holly in its hand; and, in singular contradiction of that wintry emblem, had its dress trimmed with summer flowers. But the strangest thing about it was, that from the crown of its head there sprung a bright clear jet of light, by which all this was visible; and which was doubtless the occasion of its using, in its duller moments, a great extinguisher for a cap, which it now held under its arm.

A. Fill each of the numbered blanks in the following passage with one suitable word 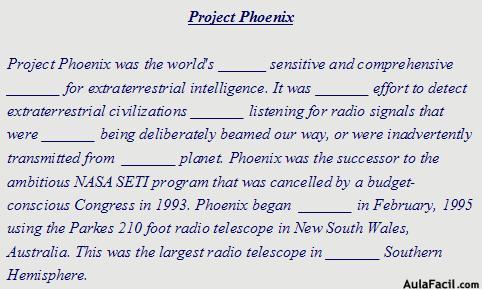 B. For each of the sentences below, write a new sentence as similar as possible in meaning to the original sentence, but using the words given in capital letters, which must not be altered in any way.

She really ought to start believing in her horoscope

It's high time she started believing in her horoscope.