Read the following jokes. Do you find them funny? Why? What types of jokes make you laugh?

Did you hear about the kid who was pulled over for speeding?

The cop got out of his car and the young man rolled down his window.

"I've been waiting for you all day," the cop said.

The guy replied, "Yeah, well I got here as fast as I could."

When the cop finally stopped laughing, he sent the kid on his way without a ticket.

A man walks into a doctor's office. He has a cucumber up his nose, a carrot in his left ear and a banana in his right ear. "What's the matter with me?" he asks the doctor. The doctor replies, "You're not eating properly."

A man asked for a meal in a restaurant. The waiter brought the food and put it on the table. After a moment, the man called the waiter and said:

"Please don't speak so loudly, sir," said the waiter, "or everyone will want one."

Bored office workers have always known that e-mail's main use is for passing on jokes. Now the advertising industry has woken up to the power of viral marketing, reports Kate Burt

"My arse hurts", says one chocolate Easter bunny to the other -a bite- chunk taken out of his edible derrière. "What?" replies bunny number two, whose cocoa ears have been chewed off. How many of you got emailed this visual joke? Maybe you forwarded it, too. What about that iconic image of Myra Hindley and Ian Brady, but with the faces of Kate Moss and Pete Doherty transposed onto them? The clip of George Bush's State of the Union speech, where he ominously announces: "We are gathered here to threaten the world." Or perhaps you've interacted with "Subservient Chicken" - the overd fowl who cleverly follows any instructions you type on to the screen.

If none of the above is ringing any bells, you either don't work in an office, never get bored at work, don't have a computer, or are too busy or interesting to ever open any group emails that have "FW: have you seen this?" in the subject box. The rest of you will already be viral email veterans (even if you didn't know it). The viral is where words, spoof images or film clips, you've been framed moments, guerilla marketing, cultural subversion and the unsuspecting celebrity all meet - and get spread around the internet community through personal contact. Once it would be nothing more than a text-only joke but, with broadband nearly everywhere and editing software ever more sophisticated, so virals have upped the stakes.

The viral email has become such a phenomenon that the ICA is hosting the first exhibition devoted to it, outrageous and contagious, which will be followed by the second annual viral awards, Germ. The exhibition covers everything from camcorder bloopers to comedy snapshots, political satire and plain weirdness such as the webcam kid miming wildly along to camp Europop song Numa Numa, intercut with stills of feta cheese and photos of his friends.

There are also sections devoted to news stories - Katrina, Kate Moss cocainegate - or cult celebrities or entertainment that have spawned hundreds of virals: "the Hoff" (dedicated to David Hasselhoff ) and Brokeback Mountain. "The exhibition reflects how virals have come to influence today's society, from the way we document events, and the subjects we talk about, to the way we are marketed to", says Pete Brown, founder of (scarily addictive) online viral archive boreme.com, which co-curated the show. "It also reflects how anyone can now create a good idea in their bedroom and have it seen by the world in a matter of hours".

"It used to be 'did you see that TV ad?' that was a hot office conversation topic, but now with the immediacy of emails it's virals that people are talking about", says Dan Brooks, one half of Lee and Dan, the creative duo behind the infamous spoof VW advert in which a suicide bomber blows himself up inside a Polo, only for the car to remain intact ("small but tough" reads the text at the end). It brilliantly illustrates the power of the medium. Made on a shoestring, the clip was the most watched viral of 2005, with over 2.3m downloads. This was a case of what's been dubbed "brand hijacking", because VW - and Lee and Dan - insist the car firm had nothing to do with the film. And yet both parties came out of it exceedingly well: the Polo gained an image as a bombproof car, while Lee and Dan got high-profile advertising briefs from the likes of Channel 4, McDonald's and Ford.

As Lee and Dan of course knew, when any organically evolved trend becomes a phenomenon, the glossy world of advertising is never far behind, usually hiding behind the fashionably distressed banner of "guerilla marketing". And now brands are employing specialists such as the Viral Factory to make subversive adverts they'd never get away with on TV, like the Trojan Olympics, which so far has had 35m views according to the agency's website. The ad brilliantly spoofs a male/female gymnastic duo competing. It's only when the camera pans out that you see their leotards end at the waist - and you realise it's sexual gymnastics they're displaying. "I think it's quite an honest way of marketing", says cofounder Matt Smith. "We're going to make something you like - and hopefully the entertainment equals the selling part of things".

But it's the bedroom uploaders who produce the real gems. "It's very difficult to compete with DIY virals", admits Smith. "The joy of them is that it's all just so totally random you never know what you're going to get next". Which pretty much sums up 17-year-old bedroom music producer Josh McInnes aka Jakazid from Portsmouth. When he saw the Michael Winner Esure advert on TV, he found it so hilarious that he made a homage - a hard dance remix called Calm Down Dear.

When a friend uploaded his creation to "boredom" website b3ta.com, Josh's hotmail account crashed under the weight of fan emails. Inspired by the attention - not to mention the goody bag Esure sent him when they saw the clip - Josh made a follow-up, the Cillit Bang "hardcore cleaner" remix. So far Cillit Bang haven't sent a goody bag, though Josh has got a deal to release it as a single with happy hardcore label Nukleuz. "It's quite amusing to realise I could be making a fair amount of money from something that began as a joke", he says. Sadly for Josh, probably not as much as Esure made after having their advertising re-moulded for free.

"If a viral provokes laughter, anger, controversy or confusion, then I'd say it was successful", says Neil Hepburn. His photoshopped "Welcome to London " image of a signpost outside Camden tube station, offering directions such as "traditional muggers, charity muggers, skunk, happy slappers and mushrooms" won him one of three awards at last year's Germs. Hepburn, who works under the name Beau Bo D'or and compiles a virals-themed blog at bbdo.co.uk, was also behind the Moss/Doherty mock-up, which he was sad to see misunderstood. "I wasn't taking the piss", he says, "it was meant to be a comment on how the red-tops were demonising them".

But it's not all happy endings. Light-sabre Boy, aka Star Wars Boy, was portly Canadian teenager Ghislain Raza, secretly videoed by classmates re-enacting his own private Jedi knight battle using a broomstick. Uploaded to a filesharing site, it went global. But his new-found fame apparently wasn't welcome, leading to reports that Ghislain dropped out of school and received psychiatric help to deal with the trauma. Of course, that story could be a viral in itself ...

A. Answer the following questions according to the text. 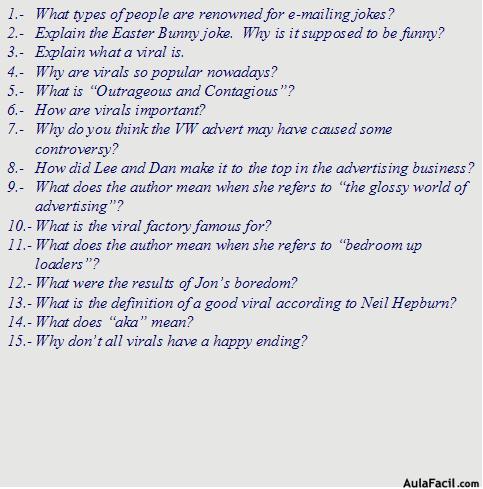 B. Find a word or phrase in the text that is similar in meaning