Job Ads: Reading between the lines

Checking out job advertisements is popular with executives worldwide. But though the activity is universal, is the same true of the advertisements? Are executive positions in different countries advertised in the same way? A comparison of the jobs pages of The Times of London, Le Monde of Paris and Germany's Frankfurter Allgemeine Zeitung suggests not.

First, what UK job seekers consider an essential piece of information -what the post pays- is absent from French and German adverts. It is often left to applicants to raise this themselves. In contrast, most British advertisements mention not only salary, but also other material incentives including a car and fringe benefits. French or German advertisements rarely refer to these.

The attention given to rewards in the UK indicates the importance of the job and its responsability. In Germany and France, that information is given by the level of experience and qualifications demanded. Salary can be assumed to correspond with this.

If French and German adverts are vague about material rewards, they are precise about qualifications. They usually demand "a degree in ...", not simply "a degree". In Germany, for example, a technical director for a machine tool company will be expected to have a Diploma.-Ing degree in Mechanical Engineering.

French advertisements go further. They may specify not just the type of grande ecole degree, but sometimes a particular set of institutions.

All this contrasts with the vague call for "graduates" (or "graduate preferred"), which is found in the UK. British companies often give the impression that they have a particular type of applicant in mind, but are not sure about the supply and will consider others. Their wording suggests hope and uncertainty, as in this advertisement from The Times: "Whilst educational standards are obviously important, a large measure of personal enthusiasm is likely to secure the success of your application."

In the UK, qualifications beyond degree level make employers nervous, but in France or Germany it is difficult to be "overqualified". Many people on German executive boards have doctorates and the French regard five or six years of intensive post-bacealaurat study at a grand cole as ideal training. British managers are not selected primarily for their intelligence, as managers are in France or for their expert knowledge, as in Germany. Instead the British give importance to social, political and leadership skills.

This difference also shows in the personal qualities mentioned. British advertisements stress energy, ability to communicate and motivate. German advertisements like achievement, but it tends to be less personality-driven. German companies want candidates with sound knowledge, experience and competence in their field. They rarely recruit novices, as do British employers. French advertisements refer more to intellectual qualities like analytical aptitude and independence.

All this points to three different conceptions of management. The French regard it as intellectually complex, the Germans as technically complex, and the British as interpersonally complex. But they agree on one thing: it's complex. 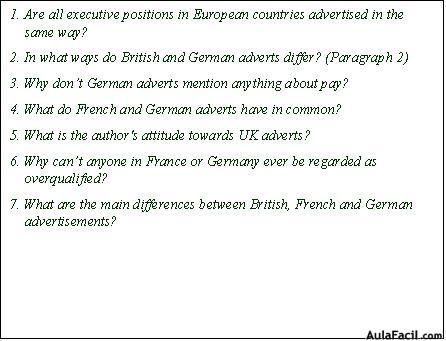