You are going to listen to a news report from The Guardian that describes how and why Coca-Cola is going to stop advertising its product in British Schools.

Listen carefully answer the questions below.

Coca-Cola to drop advertising in schools

Coca-cola is to remove advertising of its products from the front of around 4,000 vending machines in secondary schools across Britain.

The step, a major shift in policy for one of the world's most energetically promoted companies, follows a decision last month to remove pictures of products from machines in Scottish schools.

Coca-Cola Enterprises, the distribution arm of the company, said the decision recognised the "conflict" between vending machines in schools and the status of classrooms as "commercial-free" areas.

The company also announced changes to the content of machines in schools, with a greater emphasis on drinks such as Oasis, Five Alive and Dasani bottled water.

The move comes after concerns have been raised about the effects on children's health, particularly obesity, of fast food and regular consumption of drinks such as Coca-Cola.

Coca-Cola has 4,000 vending machines (*) in around 1,500 secondary schools in England, Scotland and Wales. There are none in primary schools.

The company operates each machine and pays the school a percentage of the takings.

In a programme of changes to machines between now and September, pictures of cans of Coca-Cola or Fanta will be replaced by panels showing children playing in a cartoon scene.

Ian Deste, head of corporate affairs at Coca-Cola Enterprises (GB), said: "We share the view that classrooms should be a commercial-free area and clearly there is some conflict then with highly visible, highly branded machines.

"We hope this move will be seen as us being responsive to the sensitivities in this area." He rejected talk of vending machines being banned from schools altogether.

"There are three reasons why we are in schools," he said.

"Firstly our products provide refreshment, secondly we provide a valuable revenue stream to the school, and finally it enables teachers to keep children on the premises who might want to leave to buy the products elsewhere."

Doug McAvoy, general secretary of the National Union of Teachers, said: "This is a sensible move but we would like to see the end of advertising unhealthy food and drink to children altogether."

The BBC agreed earlier this month to drop mention of Coca-Cola from its weekly music charts after a sponsorship deal was criticised.

The corporation was attacked for plugging the fizzy drinks firm on the Radio 1 chart rundown and BBC1's Top of the Pops.

Coca-Cola had signed a multi-million pound deal with the Official UK Charts Company to sponsor the singles and albums lists.

Listen and answer the following questions. 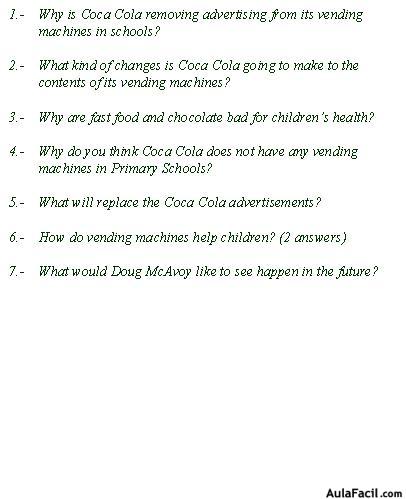