In today’s lesson, we are going to talk about the news. We are going to look at common expressions and vocabulary associated with certain news stories. Let’s begin!

A. Answer the following questions out loud giving as much information as possible.

Nowadays, we often find re-occurring stories in the newspapers. Here are a few issues that frequently appear:

A. Translate the issues into Spanish. Use a dictionary if necessary.

A. Listen to your teacher. How many syllables are there in each issue?

B. Look at the following stress patterns. Place the issues into the correctcategories.

5.- Focus on Vocabulary: Language of newspapers

Before you listen to a few news stories, we are going to look at some key vocabulary.

A. Match the words to their definitions. 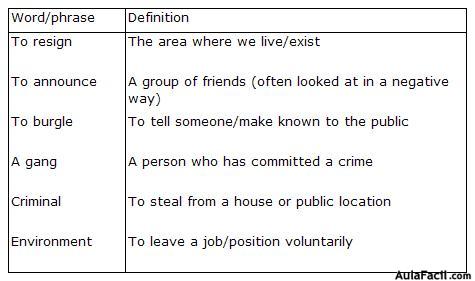 You are going to listen to three news stories.

A. Listen. What issue does each story talk about?

Check your answers by looking at the audio script.

Philip Brown, a German teacher from the London High School in Soho has resigned from his job after the school announced that it will no longer be teaching German to students. Philip Brown, one of the school’s main German teachers is very angry. He believes German is a very important language and that all students should have the opportunity to choose what they study.

A house was burgled on Saturday night by a gang of five people. When Claire Woods arrived home after her sister’s wedding, she was devastated to find her house had been burgled. The television, DVD player, microwave and digital radio were just a few of the things taken. Neighbours saw five people enter the house at about 10pm. The police were called immediately but were not able to catch the criminals.

Last month temperatures in the UK reached 43 degrees. This is the highest temperature ever recorded. Scientists are blaming the increase in temperature on global warming. A scientist from University College London claimed, “The more damage we do to the environment the higher temperatures are going to get. We need to be more careful with our actions. We need to recycle more and we need to increase our use of public transport”.

It’s now your turn to invent your own news story. It doesn’t have to be very long but it does have to include some of the new vocabulary from today’s lesson.
The issue you have to talk about is:

Try and write it first and then practice saying it out loud. Good luck!

Advice – How to improve your listening skills

As a language learner, it is very important to read and listen to the news in English. Not only can the news help you improve your vocabulary, it can also help you with sentence structure and grammatical issues.

Here are a few links that you can access online: