In today’s lesson we are going to look at different types of films. We are also going to learn new vocabulary related to films.

A. Look at the following pictures. What types of films do they represent?

B. Match the film genre to the definition. 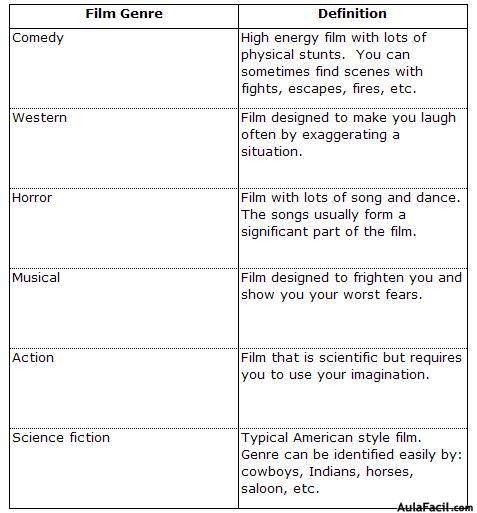 Answer the following questions out loud:

If you need help answering these questions, here are some useful phrases.

You are going to listen to four different people talking about films they have seen at the cinema.

A. Before you listen, write four adjectives you think the speakers might use to describe the films.

A. Listen to the four speakers. How many adjectives do they use to describe the films? Did you guess the same adjectives?

B. Listen again. Note the film type each speaker mentions and also words or phrases that helped you identify the type of film.

C. Listen again. What did each person think of the film they saw?

A. Read the film reviews and match the words/phrases in bold with their definitions.

The last film I saw at the cinema was a film directed by Michael Patrick King. It was brilliant! It was a romantic comedy set in Abu Dhabi. I loved the film. It was very easy to watch and at one moment, I couldn’t stop laughing. The film stars one of my favourite actresses Sarah Jessica Parker. I would definitely recommend this film to anyone who wants to relax and laugh a lot!

I saw this terrible film a few weeks ago. I hated it. It was a horror film set in Poland. From the moment it started, I had my eyes shut! Really frightening! I have no idea who stars in the film; I don’t think they were famous actors or actresses. But I can tell you, the film is about a group of 5 friends who go on holiday and one by one they get murdered. Eventually they are all killed, so not a happy ending!

I don’t go to the cinema very often but I went last week to see an action film. It was alright. The film was action-packed with lots of stunts but the actors were really bad. Bad acting always destroys a film. One thing I did like about the film was thesoundtrack. I would definitely recommend this film for its great music!

The last film I saw was a film based on a book I had read. I really enjoyed the book so I thought I would like the film. It is a science fiction film and it was really enjoyable. There were lots of special effects and it was really fast-moving. I liked it so much that I want to see it again next week. 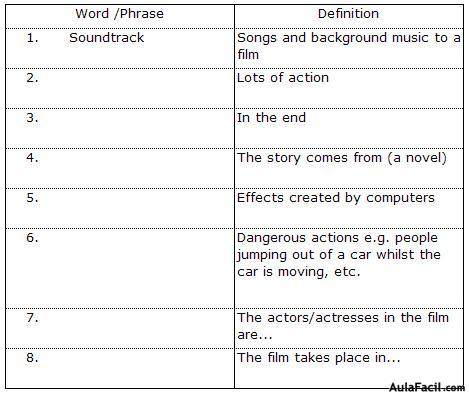 B. Choose a word/phrase from the list below to complete the sentences. You may need to change the form of the word/phrase.

We have heard four different people describing films they have seen. Now it’s your turn!

You have 2 minutes to talk about a film that you have seen. You have to give the following information:

Plan what you are going to say and then time yourself! Remember you only have two minutes!

If you need any help, you can always watch your teacher carry out this speaking task.