In this lesson, we are going to talk about drugs. We are also going to focus on two modal verbs: must and have to.

In the world today, there are two types of drugs on the market: soft drugs and hard drugs.

1.1.- Look at the following drugs and decide if they can be categorized as soft or hard drugs. If you don’t know the meaning of the words, please look them up in your dictionary. 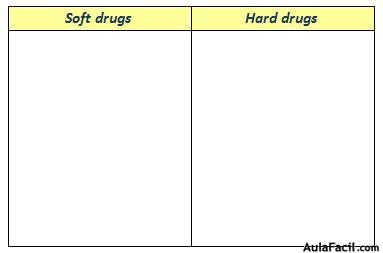 Listen to your teacher categorize the above drugs.

Before you carry out the listening, please learn the following vocabulary:

You are going to listen to an extract taken from The Observer newspaper which talks about the famous ‘coffee shops’ in Amsterdam.

a) Before you listen, test your knowledge on the current situation in Amsterdam by filling in the table:

3.3.- Listen and check your answers. Correct the false answers.

Amsterdam has long been famed for its relaxed approach to prostitution and soft drugs.

But all of this may be about to change. As part of a major ‘clean up’ of the city centre, the local authorities yesterday unveiled plans to close half of the little coffee shops where cannabis can be bought and smoked.

For several years coffee shop owners haven’t had to worry about the law on cannabis although they faced a new challenge earlier in the year when a ban on smoking tobacco was introduced. The new law means customers can’t put tobacco in their spliffs and have to smoke the drug pure. This has caused problems for those who are not used to strong doses.

But critics of the licensing laws are mainly worried that coffee shops attract organised crime and hide more violent criminal activity. A spokesman for the city said, “We should act now to reduce the number of coffee shops and control the criminals better”.

However, those against the ban, including coffee shop owners and travel agencies say that closing coffee shops will damage the city. A spokesman from STA travel said “Amsterdam must be careful to preserve its unique appeal or tourist might look to other liberal places like Copenhagen for that kind of holiday”.

This text has been adapted from an article by Peter Beaumont, The Observer, Sunday 7th December 2008

We are now going to look at the differences between "must" and "have to".

Look at the following two sentences which have been taken from the listening.

Which sentence refers to an outside authority (official regulation) and which one refers to the speaker’s own authority?

We use "must" when it is the speaker’s own authority:

We use "have to" when we are referring to an outside authority or an official regulation:

Complete the sentences using must, have to, mustn’t or don’t have to.

Answer the following questions out loud with as much detail as possible.

You may find the following phrases useful:

I think that…
I believe…
In my opinion…
On the one hand... on the other hand…