Look at and describe the photos below. Why do you think fashion changes every year? Do you follow the fashions? What is in fashion this year?

The last bits of machinery had disappeared from Europe's biggest building site last week to allow tens of thousands of travellers to stride across the glistening marble floors of the huge, wavy-roofed new terminal at Madrid's Barajas airport.

This glass-clad cathedral of light and space, its soaring roofs held up by brightly coloured pillars, is the work of Sir Richard Rogers, just one of the architects who have flocked to Spain as the country becomes the new frontier of world architecture. The man who built the Pompidou Centre in Paris has found a fresh lease of life in the bright world of Spanish architecture.

'The cork has been pulled out of the champagne bottle and now it is all just bubbling out,' says Rogers , explaining how the country's release from 40 years of stultifying dictatorship under General Francisco Franco helped generate a love of exciting new architecture.

He is not alone. This week the New York Museum of Modern Art will open an exhibition devoted to the remarkable new wave of bold architecture that is sweeping across Spain . 'This is the hothouse of Europe in terms of new buildings,' says the show's curator, Terence Riley. 'The percentage of commissions going to high-profile architects in Spain is notably high'.

He points to eight winners of the Pritzker prize -architecture's Nobel- who are all working there. 'If you are that well known, you can pretty much choose where you work,' says Riley. 'Now many of them have second offices in Spain'.

A spirit of enthusiastic optimism infects these professionals as they see buildings in Spain go up in half the time they would elsewhere.

Jean Nouvel, the French architect who has raised a colourful, cucumber-shaped block of offices to headquarter the water company in Barcelona, is one of those amazed at how fast the Spaniards can commission, give planning permission and build the new wonders. Nouvel's first architectural playground was Paris, but even there it took him up to a decade to build each of his three major projects.

Riley sees a mixture of European Union funding, Spain 's long-running building boom and a general desire to catch up with the rest of world in cultural terms as powering Spain 's rapid leap to the forefront of world architecture. 'In Spain people don't only want to do it, they want to do it quickly', he says.

He points to what he calls the 'Bilbao effect', generated by the opening of architect Frank Gehry's shiny, titanium-clad Guggenheim Museum in former docklands. The Guggenheim is the dramatic centrepiece of an urban regeneration programme that saw culture and architecture as the driving forces behind an ambitious project that revitalised the depressed industrial city. Museums and conference centres by prominent architects have now sprung up in most major Spanish cities. Among the biggest are Peter Eisenman's City of Culture, now rising on a hillside overlooking rainy Santiago de Compostela, and the soaring collection of buildings that architect-cum-engineer Santiago Calatrava has built looking towards the Mediterranean in Valencia's City of Arts and Sciences.

Gijs van Hensbergen, biographer of the great Catalan modernist architect Antonio Gaudi, says there is an appetite for risk-taking among a new generation of Spanish urban planners. 'The big gesture is something the Spanish are good at,' he says. 'In northern Europe we are less brave'.

Not all the new buildings are publicly funded. Frank Gehry, Santiago Calatrava, Sir Norman Foster and Rafael Moneo are all working on new bodegas with boutique hotels for Spain's wealthiest vineyards. 'There is a huge sensibility among Spanish businessmen that design is really important. That is unique', says Van Hensbergen. 'These are extraordinary buildings anyway, but they see them as part of a whole new branding exercise'.

He believes Spaniards are also blessed by not being restrained by their past. 'They don't have a Prince Charles,' he said. 'A lot of their buildings are homages to Gaudi and a new building method that he, in a sense, invented. His disciples have come on track 100 years later'.

Riley agrees that there is little to stop innovation in Spain. 'There is no voice against change or experimentation', he says.

The architect Emilio Ambrasz, born in Argentina and now based in New York, has completed one of the strangest new buildings to have risen on Spanish soil. His House of Spiritual Retreat, partly buried underground, is topped by two soaring walls of brilliant white, which look like sails floating across the empty, rolling countryside near Seville, where horses and fighting bulls are reared.

Ambrasz explains that those who commission work in the town halls are often architects themselves. But, he says, this is just part of a deeper Spanish respect for culture: 'Spaniards have been very attentive to the cultural process and in so doing they have been very inventive' .Ambrasz's building was paid for by the owners of a stud farm.

Riley points out that, with the Madrid airport terminal finished, the next biggest building site in Europe will soon be another Spanish project, a Barcelona transport interchange. Among those at work in the city, where many of Spain's most exciting architecture is being carried out, is Richard Rogers. The country 'has a culture that is willing to look for the best - it doesn't matter where it comes from', he says.

A. Answer the following questions in your own words, according to the text. 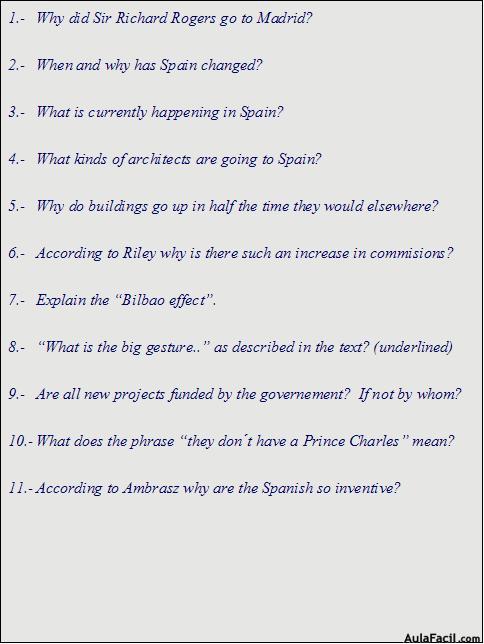 B. Explain the meaning of the following words or phrases underlined in the text